It's Banned Books Week (9/18-9/24)! Typically held during the last week in September, this annual event, now in its 40th year, celebrates the freedom to read. Each year the American Library Association tracks which titles have been most targeted for removal or restriction in libraries and schools. In the spirit of this year’s theme, “Books Unite Us. Censorship Divides Us,” we encourage you to read on and explore the titles on this year’s Most Challenged list.

While this book started as a way to recount the author’s path to self-discovery and explain what it means to be nonbinary and asexual, Gender Queer is not just a coming-of-age story, but also a guide for family, friends, allies, and advocates to learn more about nonbinary and gender queer people.

This title has been banned, challenged, and restricted for LGBTQIA+ content, and because it was considered to have sexually explicit images.

Mike Muñoz has just been fired from his job as a lawn boy at a landscaping company.  He isn’t sure what to do next, or what he’s really good at, but he is determined to break out of the rut he’s in, get to work, and succeed.  This is a funny and ultimately inspiring coming-of-age novel that confronts issues of race and class in America.

This title has been banned and challenged for LGBTQIA+ content and because it was considered to be sexually explicit.

Journalist and LGBTQIA+ activist George M. Johnson recalls his youth up through his college years, growing up as a young, queer, Black boy in New Jersey and Virginia.  Losing teeth in fights with bullies, thrifting with his grandmother, and early intimate relationships are recounted in this critically-acclaimed series of autobiographical essays for young adults.

This title has been banned and challenged for LGBTQIA+ content, profanity, and because it was considered to be sexually explicit.

In New London, Texas, in 1937, a school exploded due to a natural gas leak.  Our protagonists are Naomi, a young Mexican girl, and Wash, a Black boy, who together navigate racism, segregation, love, and violence in this gripping and tragic novel.

This title has been banned, challenged, and restricted for depictions of abuse and because it was considered to be sexually explicit.

Starr Carter lives in a poor, mostly Black neighborhood, but attends a prep school in a wealthy and predominantly white suburb.  When she witnesses her best friend killed by a police officer, even though her friend was unarmed, she can no longer ignore the imbalance between her home and the world of privilege in which she is educated.  As her friend’s death becomes national news, Starr must choose what to say and what to keep quiet in the case of pressure from police, drug dealers, and others in the communities she moves between – choices that could endanger her own life.

This title has been banned and challenged for profanity, violence, and because it was thought to promote an anti-police message and indoctrination of a social agenda.

Arnold is a good student, talented cartoonist, and competitive basketball player in high school on the Spokane Indian reservation, who is encouraged by a teacher to attend a white school in a rich area, so that maybe he can move out of rez one day.  His move to the new school alienates him from his community, and he struggles to fit into his new environment, all while the crushing disease of alcoholism overtakes his family and others on the rez.

This title has been banned and challenged for profanity, sexual references and use of a derogatory term.

Greg Gaines is trying to keep a low profile to survive high school, and cope with its stresses by making films with his friend Earl.  His plan to coast through senior year unscathed is disrupted when his mom sets him up to be friends with a girl who has cancer, in this novel about teenage life, love, and loss.

This title has been banned and challenged because it was considered sexually explicit and degrading to women.

Pecola Breedlove is an 11 year old Black girl who believes herself to be ugly, and prays for her eyes to be blue so that she can be beautiful like the white, blond haired, blue-eyed American ideal of beauty.  This novel explores the consequences of racism, sexual violence, and trauma on the individual psyche and entire communities.

This title has been banned and challenged because it depicts child sexual abuse and was considered sexually explicit.

For teens with questions about growing up under the LGBTQIA+ umbrella, this books offers information on sex, politics, coming out, stereotypes, and more.  This is an uncensored book that offers relatable, first-person accounts, and frank discussion, of sexuality and what it’s like growing up queer.

This title has been banned, challenged, relocated, and restricted for providing sexual education and LGBTQIA+ content.

Six transgender youth are profiled in this complex and varied profile of young trans life.  Teens featured in the book have greatly varied life experiences and come from diverse backgrounds, and Kuklin approaches each subject with compassion and nuance.

This title has been banned and challenged for LGBTQIA+ content and because it was considered to be sexually explicit.

Summaries have been adapted from publisher’s descriptions in our library’s catalog. You can click the links to explore more about each title.  We encourage you to visit your library to check out any book this month in celebration of your freedom to read! 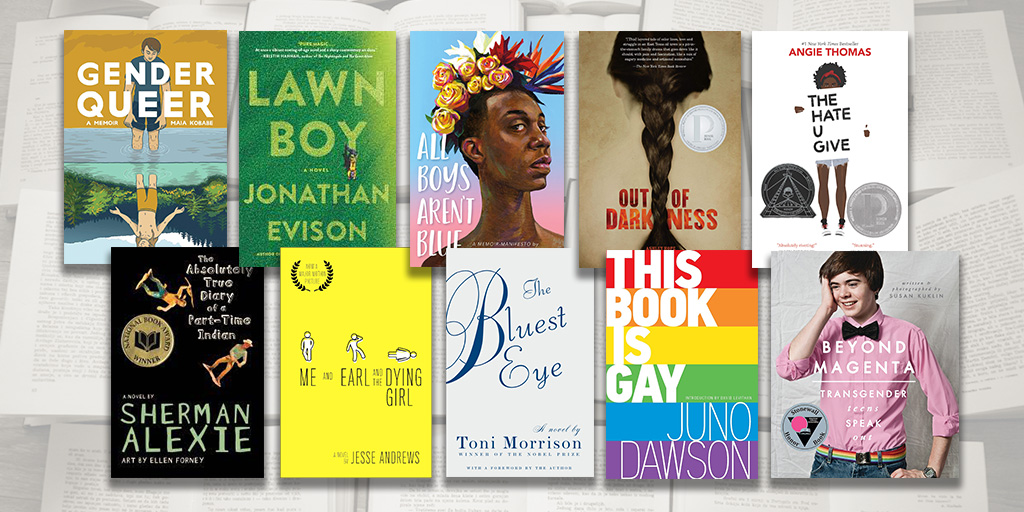